24/7 Advice My Smile Advice
Back

Teledentistry: Where It Is, Where it Came From, and Where It’s Going

Today, here at Denteractive, we’re proud to offer the absolute best, most advanced form of teledentistry. We were the pioneers of consumer Teledentistry and intend to lead the way in the future.

That’s true as of this writing and it’s true of whenever you’re reading this, too.

As teledentistry continues to develop, so will we. We constantly update our teledentistry app so that we’re always offering a better experience for our users.

Of course, we didn’t invent teledentistry. Far from it. We work to perfect it, to make it better.

People are always going to need great dental care. Teledentistry can help to provide that. It has since the beginning.

The Beginning of Teledentistry

When teledentistry was originally created, it wasn’t made to be “teledentistry.” It certainly wasn’t meant to be like it is today.

Teledentistry was meant to be a blueprint for something called “dental informatics.”

To define it simply, “dental informatics” is “using computer and information technology to improve dental practice.”

See, just about everyone in the world needs dental care. There are qualified dentists all around the globe.

Getting the best dental education and “core literature” to a dental professional clear on the other side of the world isn’t going to be easy.

It would have to get exactly to where they are, in a language they understand, in an accessible format that they could return to as needed.

This was the kind of topic that was discussed at a 1989 conference the Westinghouse Electronics Systems Group held in Baltimore, Maryland.

Eventually, they drafted a document that is more or less held as the origin of teledentistry.

That said, it was 1989. It’s not like all of a sudden, the very next day, computers made it possible for people to share their dental records or anything like that.

Really, that 1989 meeting is where teledentistry was first initially thought of, but not where it “got off of the ground.” The “birth” of teledentistry would come five years later. Like so many other computer and technological advancements, it would come from the United States Military.

In 1994, however, “Total Dental Access” was the name for the United States’ Department of Defense teledentistry project.

At first, it might seem odd that the Department of Defense is interested in teledentistry, but it would actually be a great boon for soldiers, as well as the rest of the country. Oral health is health, and streamlining medical services can help any fighting force.

Perhaps not ironically, the Department of Defense began this project for reasons that will sound familiar: “In some of the remote clinics, a patient must travel hundreds of miles to receive specialty care. Often pre and post-operative visits take only a few minutes of actual appointment time but require hours of travel by the patient. With the implementation of teledentistry, there is a potential of savings in cost and travel time required by the patient.”

That’s something that was written more than two decades ago. It sounds like something we could have put in one of our blogs.

Fort Gordon, Georgia in July of 1994 was where teledentistry got its first true opportunity.

The idea was that pictures of fifteen patients’ mouths were transmitted from Fort McPherson, Georgia, which was roughly 120 miles away. These patients had gone to Fort Gordon for surgery, but then one week after, went to Fort McPherson for imaging and to get their sutures removed. Those images were then sent to Fort Gordon.

This study was a success, as 14 of the 15 patients “saved the return trip to Fort Gordon.”

To quote the study: “The patients uniformly felt that they had received better care than they normally received and were especially pleased at the elimination of the long trip to Fort Gordon. The dentists were also comfortable in their ability to make proper decisions and diagnoses using the equipment.”

Where Teledentistry is Now

To say that the technology has advanced since July of 1994 is a vast understatement. For example, in the Fort Gordon study, the images of the patients’ mouths were transmitted “over a 9600 baud modem.” That’s the technological equivalent of simply walking the 120 miles, pictures in hand.

Teledentistry has made good on its promise of getting a board-certified dentist in practically any area.

The truth is that there are areas in the United States and around the world where there really isn’t much in the way of a dentist.

Hopefully, there is a hospital or a doctor of some sort, but there really isn’t a dentist with board-certification.

Of course, people in these areas still have all of the same dental issues that anyone else might.

Rural areas, remote areas, some areas deep within cities — we’ve found that there are more places than the layperson thinks that don’t have a trusted dental professional.

Now, with teledentistry, they do.

The Limitations and the Promise

Teledentistry is obviously not at the point where the dentist can reach through a phone or computer or something and assist someone’s teeth. There are limitations to the technology.

But, there are far fewer limitations to technology than the average person might think.

For example, video-conferencing is highly advanced.

Today, dentists can use teledentistry to make an accurate preliminary diagnosis. They can receive images that are just as crystal clear as if the patient were in the dentist’s office.

This is a large part of what makes teledentistry credible. It’s not like a phone call. The patient can describe their feelings and their pain level, without having to adequately describe what something looks like in their mouth (that they themselves may struggle to see).

For a dentist to make the best diagnosis, for a dentist to best serve the patient, they must have as much information as possible. That means being able to see exactly what’s going on inside the patient’s mouth, sure, but it also means knowing the patient’s past. Medical records are an invaluable resource for any medical professional.

Indeed, here at Denteractive, one of our 24/7 emergency dentists can look at a patient’s complete records in just seconds. That way, they’re in the best position to be able to make a diagnosis and to help with pain management and solving dental concerns.

The records are there, easily accessed when the dentist needs them.

Really, it’s one more way that teledentistry makes good on its promise from its origin, so long ago.

More than Just for Emergencies and Convenience

While much of what we’ve discussed about the present of teledentistry has been about helping a patient through their second opinions and follow-ups as well as for emergencies.

Teledentistry can do so much more than that, however.

For example, here at Denteractive, we’ve utilized teledentistry to help people to better find a dentist.

After all, the prefix for “teledentistry” is “tele.” When you use our platform, you’ll be able to see and interact with the dentist, just as you would if you were in their office.

This is why so many people use Denteractive and other teledentistry platforms to find a dentist that’s “right for them.”

We use the phrase “dentist that’s right for them” often, but that’s because it’s really important. You should trust your dentist, you should “get along” with them. The last thing anyone wants is a dentist that they don’t feel comfortable around.

That said, trying to find a dentist without the use of teledentistry can be extremely difficult. You have to search online to find one, then call them, and just, well, hope that you get along, that you feel comfortable with them, and so forth.

Teledentistry, then, can help to give you a “first impression” in addition to a “second opinion.”

A Dental Professional You Can Just Reach Out To

Unfortunately, something can go wrong with your teeth when you’re traveling, when you’re camping, when you’re on vacation. By that same token, you could be in the middle of traffic, or a work event that you really can’t get out of, at the moment when some sharp dental pain strikes.

Teledentistry makes it possible to get help and advice quickly. Moreover, you can do it without radically altering your life.

Really, that’s the key: “you can know.” You don’t have to worry or be anxious and concerned.

For those of you that have gone much of your life without teledentistry, think back to how many times in your life your teeth hurt, or one of your gums did, and you didn’t know what it was. You were worried, but there was no way you could get to a dental professional quickly to find out exactly what the problem is.

Today, with teledentistry, you can.

Where Teledentistry is Headed

We’re often asked about “the future of teledentistry.” Obviously, we don’t know exactly what the future holds. But, one thing seems quite ironclad: access to teledentistry is going to improve.

More and more people are going to use it to get help from a dental professional. A recent survey by DentaVox has shown that up to 78 percent of consumers are likely to use virtual dental care in the next 5 years. The days of the “Driving All the Way Into Town to Meet with a Dentist for Five Minutes For Them to Tell Me I’m Fine” trip are probably going to be gone for good.

The technology, of course, will improve.

It’s hard not to think that “virtual reality” tech, somehow, will be included. Earlier, we talked about how “teledentistry can’t really allow a dentist to reach through your phone and physically fix your teeth.”

In the future, that may be possible. As technology advances, in the decades to come, it could very well come to pass that a dental professional far from you will be able to operate some kind of robot or drone that works on your teeth.

Obviously, we’re far away from that.

As we’re discussing the future of teledentistry, it’s important not to focus just on technology, but also on events.

After all, this article is written during the time of the COVID-19 pandemic. Today, teledentistry also offers a safer, less potentially risky alternative to going into a dental professional’s office.

As events change, teledentistry can change to meet them.

But, all of that is far, far in the future.

Today, we can use teledentistry to make people’s lives better right now.

As it advances, Denteractive will be there, at the forefront of teledentistry, wherever it may lead. 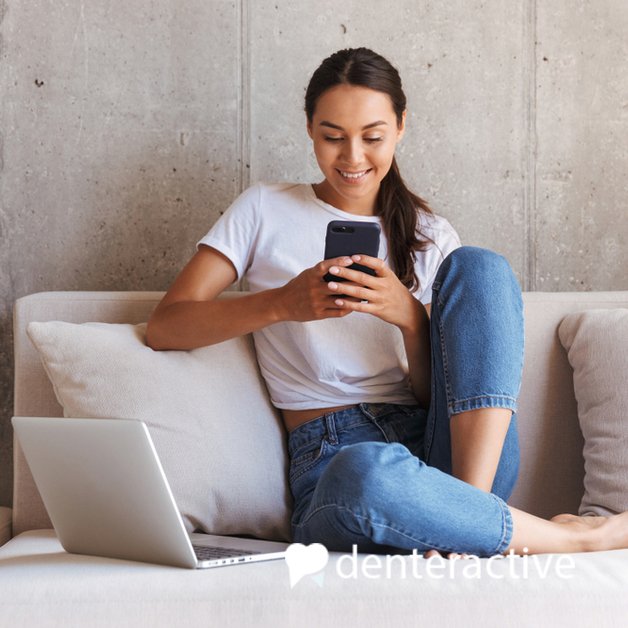 Thanks to Our Dentist Chat No More Discomfort 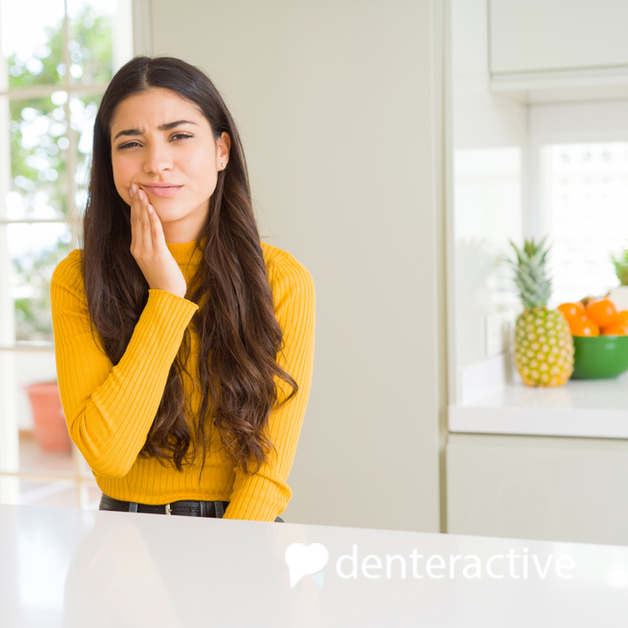 Talk to a Dentist Online About Gum Swelling 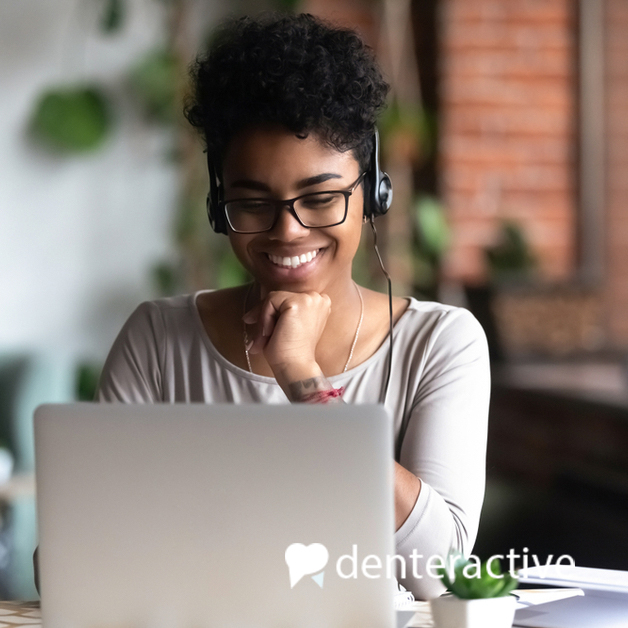 An Online Dental Consultation Gives You the Benefits Without the Problems 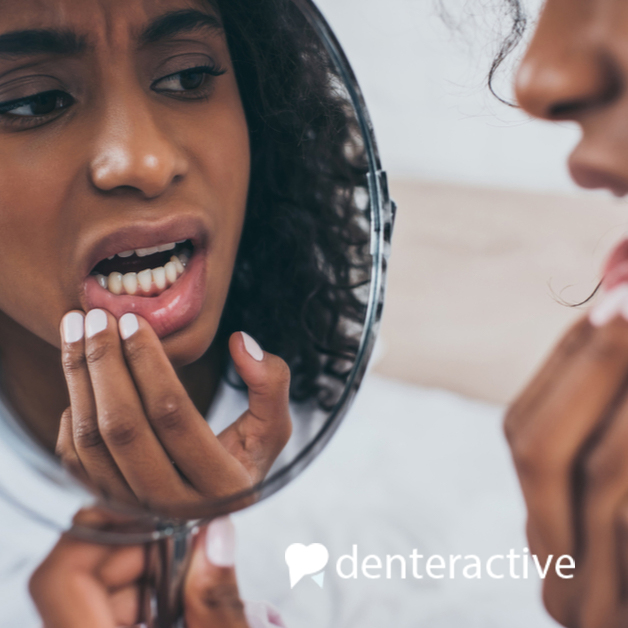